Nothing is more important to the final product then working from a carefully considered plan. The next most important thing, especially since we all know what happens to the best laid plans in the end, is having excellent quality materials. If you use solid, well built materials, then it’s hard to end up with a project that looks like anything but professional. Unfortunately, having the best can bust the wallet pretty quickly – thus the art form of material sourcing is born.

Admittedly, the expense budget was considerably higher then it was when we redesigned the Stronghold kitchen but the process was much the same. Where did we feel we could save a few dollars? Where did we want to splurge? What compromises would we be okay with in the name of our budget? As unsexy as it is, I recommend starting off a big project like this with a dollar amount in mind and start window shopping – AKA: cruising the internet for prices and links. In my world, that always ends up looking something like this. And yes, in case you’re wondering that is the exact tracker I used for most of the downstairs project. The shopping list is incomplete and missing a bunch of stuff, but I had already started getting cabinet quotes separately, and the project piece referring to the laundry? Yeah – that changed completely. But the thing to keep in focus here is that when a change was made we were able to measure it against the intent and cost of the original decision.

Sounds simple? Well, it isn’t. After having done this dozens of times now over two houses I can say for certain that it’s insanely easy to splurge on “just one thing”. Then, a week later, the same thing happens or your hiring people in because your timelines are getting away from you and you have a big holiday coming up and your house is torn apart and, and, well… you get the idea. Costs can easily inflate and the last thing anyone wants is a missing kitchen counter because they spent too much on flooring.

Since we were lucky this second time around and knew what we wanted, we really just needed to go shopping. The biggest issue? Finding the green cabinets for less then fifty thousand dollars – otherwise known as more then our entire kitchen remodel budget. Yikes. And that was hard. I visited at least five kitchen cabinet and tile places, both big box stores and IKEA. Some things were close.

Eventually, I came across CliqStudios. They’ve got an minimalist style inset door cabinet called Austin that is nearly a perfect match for the original inspirational pic we found on Zillow. Here they are side by side for comparison: 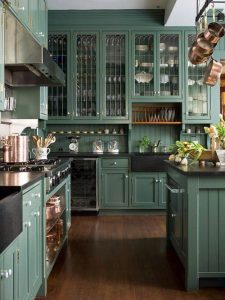 The good news? They were nearly a third the cost of the least expensive quotes I was getting everywhere else and had the same specs as the superior (read: super expensive, re-finance your house ’cause they’re that darn spendy) brands – things like soft close, exposed metal hinges, dovetailed joints and made from solid wood materials. The bad news? Well, it was a bit of a gamble buying from an online retailer I’d never heard of and the worst of all? Since it was semi-custom the color wouldn’t be exactly what I wanted. Remember what I said earlier about compromise? Sometimes close has to be good enough. And in this case I’d argue it actually turned out a bit better than the original plan.

Now before I go on, I’m not being paid by CliqStudio, I get no special kick-backs for talking them up. I paid full price and we installed everything ourselves. With that out of the way – it was a great experience! They help design your space for free and they’ll send you free color and material samples in the mail before you place your order. Both helped out with our planning tremendously.

The Tea Leaf color we opted for is as close to green as we could get with Cliq, and it’s much greener then it looks like in the photo above (or on their own website). The middle option there is the color they call Harbor. It reads gray on the website, but in the picture above and in person, it’s really light blue. Neither that nor the white are our style. Brown-green it is then! Surprise (said no one about our color palette preferences ever)!

With the cabinets out of the way we turned our attention to everything else! Flooring and knobs being the two biggies. Then just like with the Stronghold it was time to pick out the counter and we were having the hardest time figuring it out.

Did we go with an option that matched the photo?

Or did we want to invert the color for a slightly lighter, classier look?

Or do we do what we always end up doing when counters are concerned – yup, it’s crazy pattern time!

That said this did mean the counters were going to be our biggest splurge to date. At about a third the cost of the cabinets themselves it was a big one, but they matched perfectly and give the kitchen some serious personality. That and they remind us of the counters we had at the Stronghold. Sure, the colors are completely different and the pattern is a bit weaker in the new slab, but there’s something vaguely familiar.

Next up: Putting it all together and some ‘where are we now’ glamour shots!