It’s October 21st, a misty autumn day in New England. The birds are chirping, the leaves are changing and you’ve taken the day off of work to accept delivery on cabinets you ordered over a month ago. Then without much ado, a 16-wheeler truck backs into your driveway and you’re once empty two car garage becomes an overcrowded cabinet warehouse.

A few days later you take a perfectly livable space

and you rip it apart, turning it into a work zone

Your efforts are then temporarily rewarded with moving into the confines of an asthma inducing upstairs apartment.

Sound like fun? It was and it wasn’t. Like I’ve mentioned before, the kitchen upstairs actually functioned better then the one we were ripping out; but that was about the only good thing about the temporary new digs. I lost my office to the kitchen table and everything about that carpet just kind of skeeved us both out.

But don’t fret! The suffering is what gives us space to let the magic happen.

First, build the support archway so the studs can come out and open that floor plan up. No more silly mini “master bedroom”. Just one big old dining room. 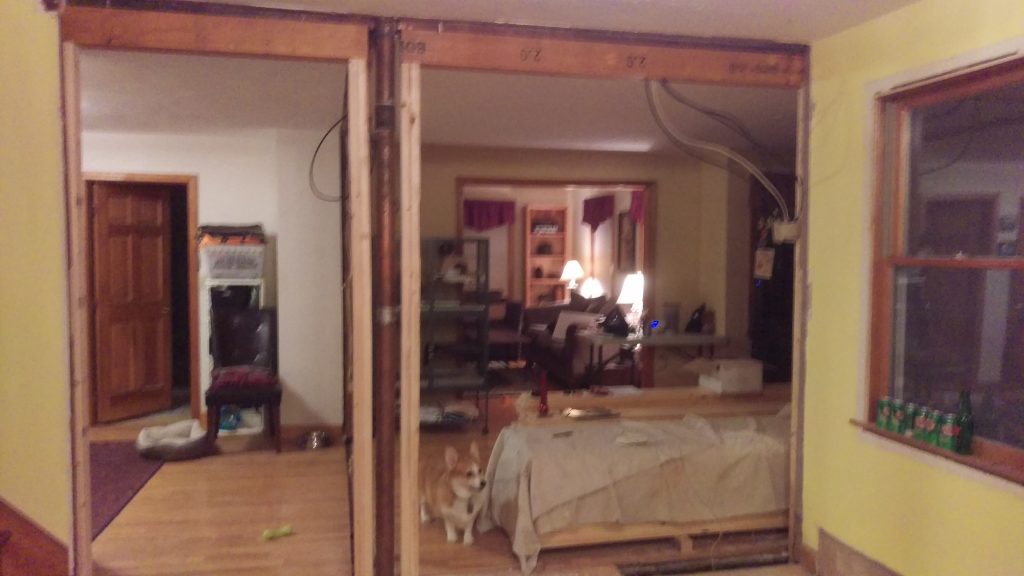 It takes longer then you think it will, and like everything in an old house needs it requires forming a new plan halfway through because the plumber would charge you a few thousand to move a waste pipe. Even still, the end result has everyone nodding their heads, and even Killian is proud. It’s also worth noting that this is the first time we ever applied for a work permit on our own. Does that make us responsible adults now? Anyway…

Then comes the two windows and dated door with asymmetrical side light. Those get replaced over the next week or so with a little help from both friends and family.

Yes – that door should look familiar. It’s the exact same on we had in the Stronghold kitchen. Like I said a few posts ago – when in doubt we would take the lead of six-years-ago us. We like what we like. Can’t ding us for that.

Then, once the windows and door are all shored up we call in the electricians. In a single week the lights are in and sufficiently de-ninetytized and the power outlets are plentiful. Since I have no pictures of the electricity done before we brought in the plasterers here’s both at once. Because if I learned one thing from the Stronghold it’s that I absolutely abhor plastering. And while Cho loves electrical work it just wasn’t feesable on our timeline this time around. He’ll have plenty of opportunities later, I’m sure.

Just make a mental note that this one picture represents about two weeks of work. Also note the brand new sub-flooring. We would have skipped the tear out shown above if it weren’t rotted out under the sink. Being an old house the floor wasn’t level either (and still isn’t 100% by the stairs if I’m being honest) so we needed to install a better floor support in the basement along with some creative shimming throughout the project. It looks pretty good though and we’re happy with the results. 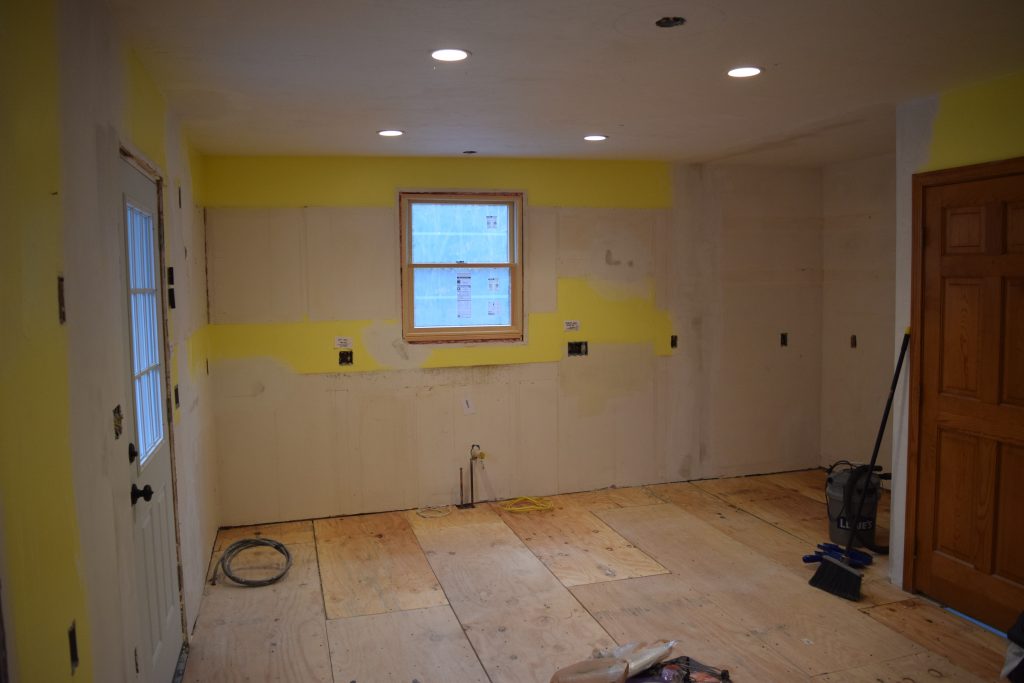 With that, welcome to the 21st Century, house! But we aren’t done yet. All this work and we’re now down to the wire with only 4 weekends to burn from this point to the December holiday and that dinner that I stupidly agreed to host. Come back next week for the cabinet and flooring revel as well as the answer to the ever looming question: Do we make it? Or are we hosting on plywood and paper plates?